Home About the BSC and the electricity industry About Elexon, its work and its roles BSC Insight: Rapid decline in coal-fired generation

In this Insight piece, Angus Fairbairn, Market Analyst at Elexon, looks at the data behind the major reduction in coal generation in Britain which has been making headlines in April 2019 as the GB market aims to phase out the fuel by the end of 2025.

As this Insight was being put together, the record for the longest “coal-free” period has been broken again over May bank holiday weekend. The coal free period started on Wednesday 1 May at 13:30 and is still ongoing (as at 10:30, 7 May 2019). This breaks the previous record set over Easter bank holiday that lasted 90.5hours (181 Settlement Periods).

In the past five years, coal’s contribution to UK power generation has dwindled. Coal’s decline is due to a combination of factors; lower gas costs, increased renewable generation at an increasingly lower cost and government pressures to meet emissions targets.

Only seven coal power stations remain, and in February this year EDF Energy announced the 2GW Cottam Power Station will close on 30 September 2019.

The graph shows how the total contribution of coal generation to the generation mix has fallen dramatically over the past 5 years, due to a move to cleaner energy sources. 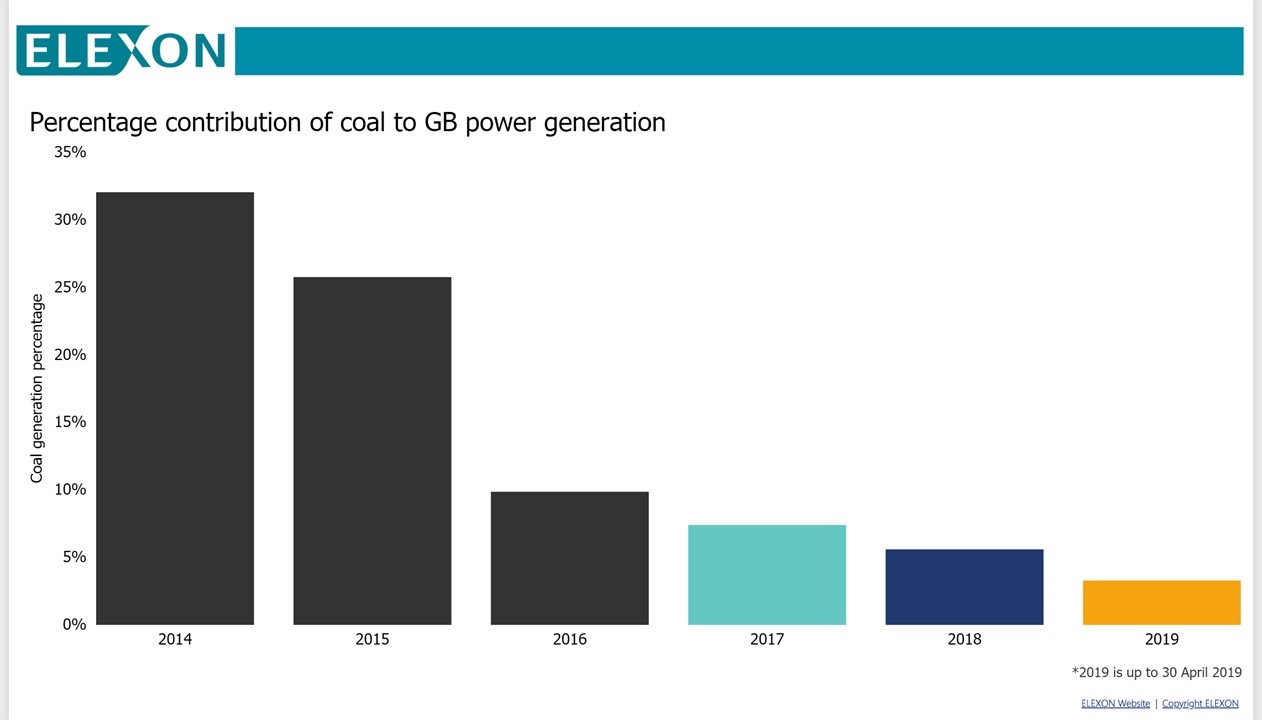 Days of ‘coal-free’ electricity generation on the rise

This will most likely increase as we enter summer months where coal output is usually at its lowest. On the 30 April 2019, the number of hours without coal was already over double that seen in the first four months of 2018, and eight times higher than the same period in 2017.

Using 2018 as a guide, the following graph aims to forecast how many hours will be “coal free” in 2019. We estimate that for 30% of the year there will be no coal generation. 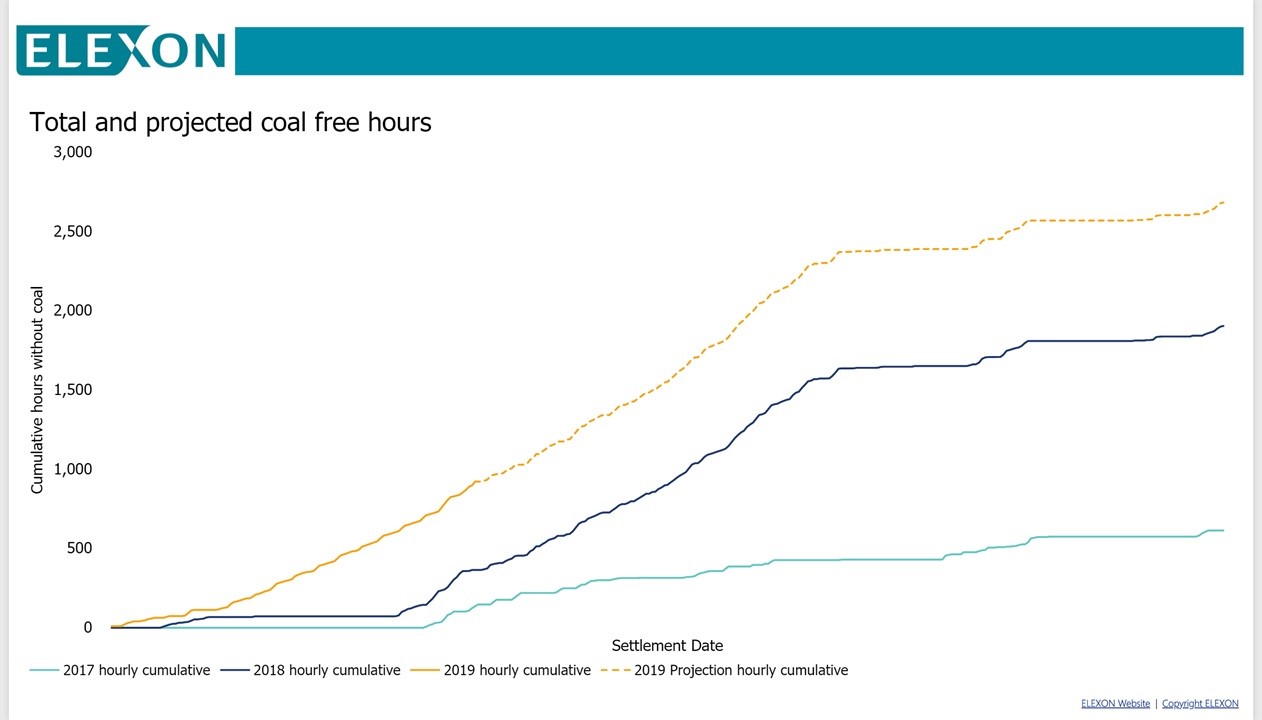 In 2017, the first 24-hour period without any coal generation occurred on 21 April. Every April since, the record for the number of consecutive full days without coal generation has been broken.

Hours of the day with coal generation 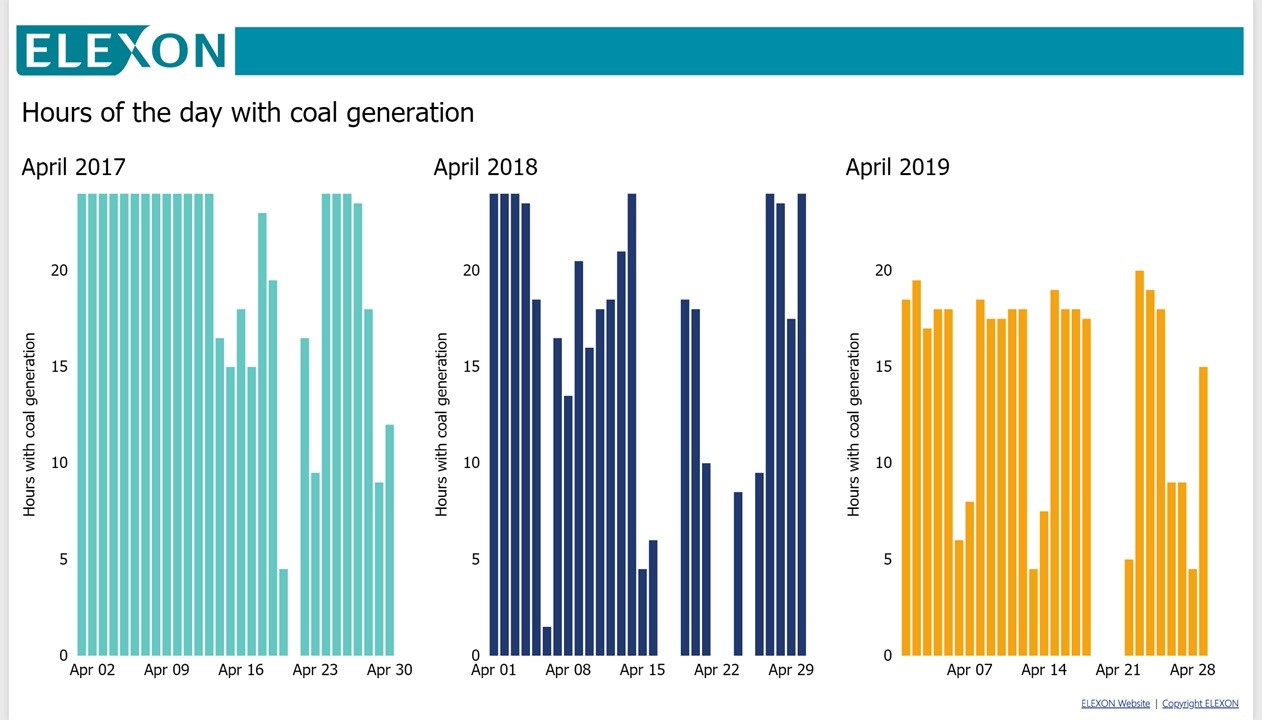 In both 2018 and 2019, this was likely due to the seasonally high temperatures (above 20˚C in London) over both weekends. It was also the Easter weekend in 2019.

Both these factors tend to lower demand, which reduces the necessity for using more expensive generation types such as coal. This led to 90.5 hours (181 Settlement Periods) with no generation from coal-fired plants; from 22:30 on 18 April 2019 to 17:00 on 22 April 2019.

Whilst coal-fired plants provided no generation, 47% of power came from combined cycle gas turbines (CCGT) with the rest made up of mainly of nuclear (26%) and wind generation (13%).

Wind generation is replacing coal and is now the third highest generation type after gas and nuclear. Wind accounted for 18% of electricity production from 1 November 2018 to 28 February 2019. 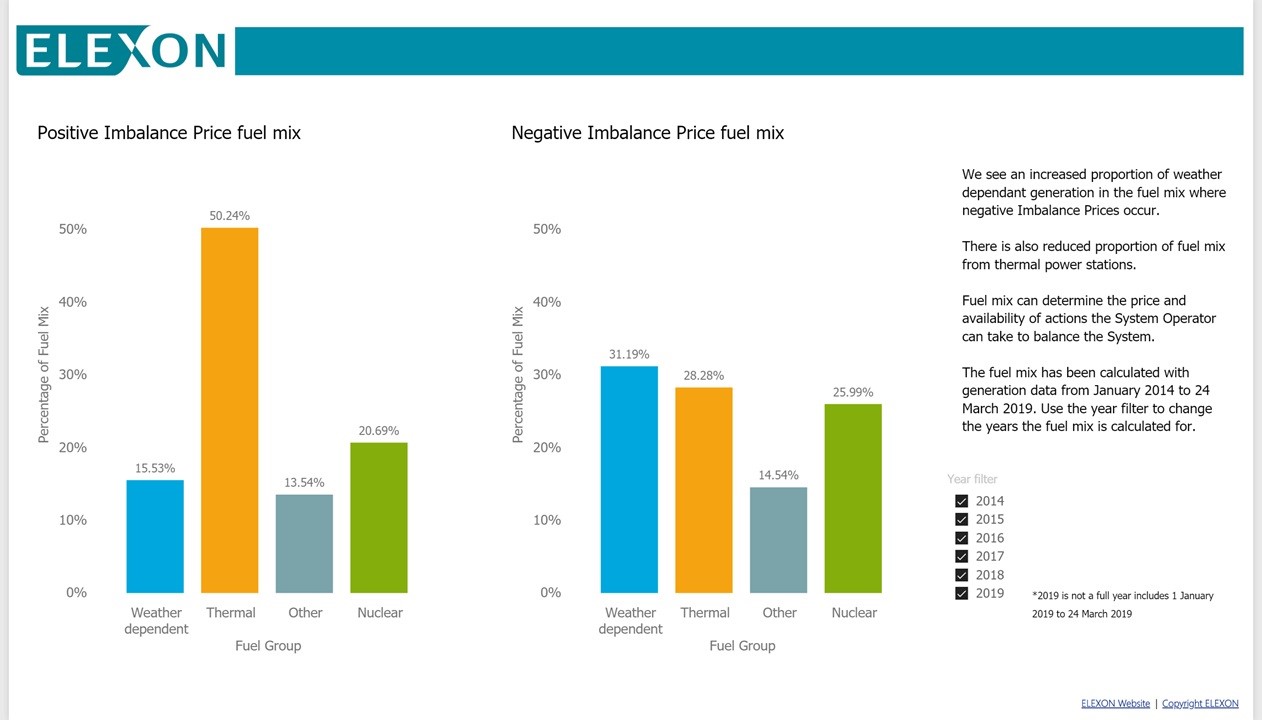 Decline in coal generation will continue

Climate change is becoming an increasingly important topic. Environmental policies, public concern about carbon emissions and the motion for the ‘declaration of a climate emergency’ being approved by the House of Commons means that coal’s decline is likely to continue.

Wind power is already filling the gap left with the coal phase-out, and new technologies such as battery storage could remove the need to run coal generation even in times of electricity scarcity. A great change from the 1880s, when everything powered by electricity was powered by coal.

Angus is a Market Analyst at Elexon and the lead author of the System Price Analysis Report and the Headline Report.