Trading disputes as a PAF technique

This page explains how the Trading Disputes process forms part of the remedial technique within the Performance Assurance Framework, how it may impact your company and the stages involved in a dispute.

How it relates to you

A Trading Dispute can arise where errors in the data, processes and/or rules used for the purposes of Settlement are identified and where such errors affect the amounts paid to or from Trading Parties. Trading Disputes can also arise as a result of errors in the determination of whether a Party is in Credit Default.

Any BSC Party can raise a Trading Dispute if our review meets the following three criteria:

Elexon reviews each submission and sends its considerations to the Raising Party and any affected Parties. The Trading Disputes Committee hears all Disputes considered by Elexon as valid.

All Trading Disputes are confidential.

About the Disputes Process

Settlement Errors occur when the rules of Settlement have not been followed and this failure affects Trading Charges. Under the BSC, Suppliers have an obligation to ensure that Settlement is accurate.

In an event when an inaccuracy is caused by directly breaching the BSC, a Trading Dispute is one of the methods in ensuring rectification.

When considering a Trading Dispute, it is important to take into account Reconciliation Runs.

Settlement Reconciliation Runs are carried out in line with the Settlement Calendar (which can be found on the Elexon Portal).

The figure below provides an approximation of how long after real-time (known as the Settlement Date) each run is carried out. 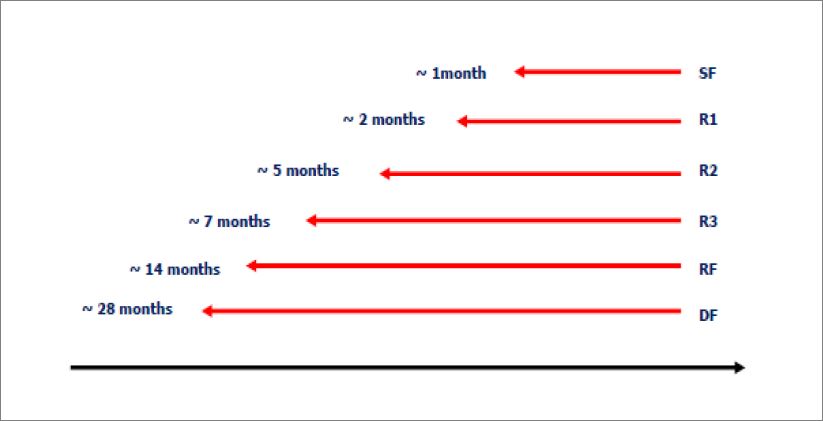 How to raise a Trading Dispute

This can be sent via email to [email protected].

Please ensure all parts of the form are filled out and that the form is co-signed by a Category ‘A’ or ‘O’ authorised signatory.

Also, be sure to include supporting information, e.g. Data Flows, Bid Offer Acceptances or consumption information.

Upon receipt of the form, the BSCCo will issue a Trading Dispute Acknowledgement Form within 1 Working Day.

Different Stages of a Trading Dispute

The outcome of each stage is published non-confidentially on the Elexon Website.

If you accept our findings we will close the Trading Dispute.

Should you object the BSCCo findings and send a notification within a prescribed timescale (normally 10 Working Days from us publishing our findings), the BSCCo will refer the Trading Dispute to the TDC for decision.

The TDC hears the Trading Dispute and decides if it is valid against the three criteria. If the TDC determines the Dispute is invalid it will reject the Trading Dispute. Our role as the BSC Administrator is to be impartial and present the facts that the BSCCo has gathered to allow the TDC to make an informed decision on a case by case basis.

If the Dispute is valid the TDC will decide how it is to be rectified (if at all). If a Party disagrees with the TDC decision it has the opportunity to refer the Trading Dispute to the BSC Panel.

The Panel hears the Dispute in much the same way as the TDC and will decide whether to overturn the TDC’s decision. If a Party disagrees with the Panel’s decision it can refer the Trading Dispute to Arbitration.

Granting exceptional circumstances is at the TDC’s (or the Panel’s) sole discretion.

After hearing all evidence on a Dispute, TDC can decide whether to uphold the dispute and rectify the error. If upheld, there are three methods of rectification available for TDC – normal Settlement Run, Post-Final Settlement Run (PFSR) or an Extra-Settlement Determination (ESD).

After the TDC meeting, the Dispute Analyst will send a BSCP11/07 form (‘TDC Trading Dispute Findings’) detailing TDC determination and the rationale behind it. The form will also specify the action needed to be taken by the Party or its Agents.

If a Supplier received this form with an action to inform its Agents, it should ensure the Agents are notified accordingly to carry out the rectification in time. Failure to put in effect a TDC determination is a non-compliance and the offending Party may be referred to PAB.

If the error has not passed the Final Settlement Run (RF), the Supplier can instruct its Agent to rescale the data in line with appropriate correction. If a Trading Dispute is raised, this can be done without taking a Dispute to TDC, if all Affected Parties agree on proposed correction.

It is also common that only part of the error is still within the timescales for normal Settlement Runs, with another part already passed RF. In such case, the BSCCo will take the dispute to TDC, where an appropriate combination of rectification methods will be determined.

No further GSP Group-level DF Runs will be available for the correction of error without re-entry of one or more GSP Groups to the Disputes process. The Final Reconciliation (RF) is now the last opportunity to make any corrections that are not the subject of an upheld, MSID-level Trading Dispute.

An ESD is performed whenever TDC is unable to achieve a rectification through Timetabled Reconciliation Runs. This happens if a dispute is raised to rectify data that is entered incorrectly in Post-Final Settlement Run or dispute investigation resulted in error volumes passing the deadline for DF Run.

However, in some circumstances an ESD can be granted for earlier Reconciliation Runs. This process is detailed in Section 4 of BSC Section W.

ESD’s are still restricted by dispute deadlines. TDC determines the dispute validity and, if requested, a case for exceptional circumstances. In cases where an ESD is required, the BSCCo will also present the proposed methodology for ESD calculation for TDC to approve as well as payment dates for Affected Parties.

TDC takes all evidence into consideration when determining which method of rectification to use, including central costs involved in running an ESD.

This method of rectification is primarily a manual process, involving the Dispute Analyst conducting the calculation and instructing the FAA to process payments. It is estimated that, on average, an ESD costs £5,000 to process.

If the TDC grants an ESD, the BSCCo will include this in the BSCP11/07 form sent to Affected Parties. The BSCCo will then send the BSCP11/09 (‘Trading Dispute Payment Authorisation Form’) form to the FAA to process the payment.

About the Performance Assurance process

Trading Disputes process is a remedial technique in the Performance Assurance Framework.

Q8 Claims relate to unplanned outages by National Grid and is a mechanism to claim for unavoidable and material losses incurred as a consequence of not being able to communicate Physical Notifications to National Grid during the outage period.

Please refer to the following guidance note for detailed information regarding large EAC/AA instances and the process to be followed when raising Trading Disputes for these particular cases.